The subject of testing has and always will be a contentious one. The new head of OFSTED has stated that she doesn’t think that our children are tested too much. This might be “officially correct” – however in the climate created by OFSTED, the pressure on schools has created a “testing epidemic!”

SAT’s testing – lets firstly consider the actual mandatory tests that children and schools have to carry out and for which, you as Coordinator are now directly responsible for preparing.

Children are to be tested on the new curriculum at both KS1 and KS2 and the results now published in a different form from previous years.

KS2 – Pupils will be tested in Maths and Literacy. Higher scores being 120 and lowest scores 80. Again expected scores are 100.

In both key stages there will be teacher assessments matched against performance descriptors for reading, writing maths and science.

Now here’s the rub – the results for children are published as a straight pass or fail – above 100 and its a pass below and its a fail. Parents will be told that their child has or has not reached the required standard!

Unfortunately in reporting the test results this way it throw the “success and failure” directly on the school. It implies “the school has or has not taught your child to successfully reach the required standard” – and many parents of children who have not are going to ask why!

( I cannot move forward without making the following comments – so apologies in advance. In raising the expected level of “good achievement” from 65-85% the government has moved the bar massively in one go. Even without changing curricular expectations this is an unreasonable movement especially as the 65% has hovered at this level for quite a few years. In coupling this with an upward shift in curricular/age requirements it effectively says “we are making all the learning requirements a lot harder and also expecting you achieve higher results than previously  – then we are going to report back on a pass/fail format)

Ok so back to being a Coordinator faced with organising and preparing the school for this onslaught!

The most basic level of thought says that you cannot blindly go through the curriculum and then “hope that things will be ok” when it comes to the SAT’s – you need to know how the children are progressing and address failings as these are identified.

This will involve testing across the year groups as the school year progresses and then analysing the results. 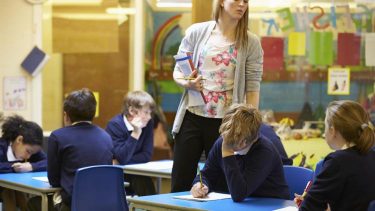 It seems from feedback I am receiving that Publishers materials are not keeping pace with the new curriculum and this may also be the case with the tests. As a coordinator you must look at the tests now being used to see if they are reflecting the additional requirements of the curriculum in order to be able to judge the pupils progress at these new levels. If not then I would suggest that the tests will need supplementing to address these omissions.

The other factor is – are the tests appropriate to the taught academic syllabus. That’s basically a posh way of saying are you testing what’s already been taught …there’s no point in testing lets say fractions if they haven’t yet been taught!

Ok so lets assume that the tests are in line with the new curriculum and they are in synch with the taught syllabus….and yes I know just to pull those 2 things together is quite a task!

How often should you be testing?…I do know of schools that are testing every 1/2 term and question analysing for every child – but I have to say this seems excessive to me. My own preference would be for once a term which I think is feasible and provides sufficient progression information for the records – without too much overload for staff.

Marking, analysing and tracking – If everything on a test is in synch with teaching then it is possible to mark and grade easily.

Question analysis – I really can’t believe that we have reached this sort of level with children this young. To me it all seems ridiculous and unnecessary. When the first tests were announced it was queried that we would be simply teaching to the tests , but the reply came that no – the tests would simply be held in the summer term as a part of the general terms work with no additional work needed ….hmmm how things have changed!

Question analysis is a long and mundane job but is seeming to be the norm in many schools. However I am going to say this – after marking tests I would only carry out question analysis for those pupils that failed to reach the pass mark – and I would speed the process by only identifying  the type of question, for example fractions, addition – extra detail can be obtained by looking back to the class records and marks (if you have them?)

This is fine for maths which is a simple right / wrong answer – so how can we speed the process in Literacy especially the written work. I would recommend having a checklist of required/ desirable literary elements that you are expecting to see in a piece of work. (shorten down the descriptors to one word each) then tick off as you read through a piece of work. Calculate on a % basis and give a score for each child. Flag any pupils failing and look deeper at another time.

Tracking the children – In carrying out these tests we therefore have a score for each child every term. These can be tracked using the grid format where we can plot the child’s scores every term. This would be the same grid that used to follow the 2b, 2a etc type of progression but now recalibrated.

Further details as regards a tracking system can be found in the accompanying article which deals directly with this.

Computerised systems – to my knowledge there are no computerised systems that operate hand in hand with their own tests. So that means any testing done will have to have results inputted manually for the computer to crunch the data. Which it will and produce any number of results and print outs. Whether you can adjust the print out or recording elements of the programme will really depend on the programme itself and you will know this better than me. However, it is what you do with the information that counts.

Whatever system of testing and tracking you use must provide you as a coordinator and also the school and governing body with a simple and effective way of testing, recording and tracking pupils progress. If it is too complex then it will prove to be time consuming and a hurdle to the process – if it too simple then it will not provide you with what you need to know. Whatever you do MUST work simply and effectively for you and your school.

I apologise for the length of this article, but to deal with it properly it was necessary to look at all the aspects. Whilst covering(hopefully) all the areas for consideration there is much that is my own take and opinion. In this I am trying to look through the problems encountered and provide some ideas for a way ahead. At the very least it may provide alternative viewpoints and at best give you some ideas to think about. At the end of the day its all about what works for your school, your staff and ultimately your pupils.