I was heartened to read the preliminary findings contained in the HMCI report commentary for October (2017).

If you have not read this report then I can recommend it as a read (takes about 10 minutes) and does actually show some degree of forward thinking and concern for what is currently happening in schools. It also divides its comments between Primary and Secondary and equal consideration is given to both sectors – which is refreshing as far too often Primary is considered a mere lead in to the secondary arena!

The link is below if you care to read…

Here is an extract:-

Without a curriculum, a building full of teachers, leaders and pupils is not a school. Without receiving knowledge, pupils have learned nothing and no progress has been made – whatever the measures might indicate. This is why exams should exist in the service of the curriculum rather than the other way round. Exams are our best measure of what has been successfully transmitted to the pupil’s cognition. We must not forget, however, that any test can only ever sample the knowledge that has been gained. It is the whole domain that is of matter to the pupil.

A good school achieves a careful balance. Balance is the constant challenge when schools plan. Time is limited. Therefore choices need to be made about what to do when, how much depth to pursue, which ideas to link together, what resources to draw on, which way to teach, and how to make sure all pupils are able to benefit as each new concept, construct or fact is taught.

However is Ms Spielman telling us what we already know – stating the obvious or is this actually a “wake up call” for those overseeing both the curriculum and testing regimes?

I have been in teaching a long time, in fact I was teaching when the 1st National Curriculum was introduced and was also around when the SAT’s tests first raised their heads (1991 – 1995). Naturally with all the changes and new initiatives, there were plenty of training course to attend and information to be absorbed and hopefully understood! I do remember however attending a training course where we were being told about how wonderful these tests would be when a colleague raised the point ” but this will mean we all just end up teaching to the tests!”…..the reply was this ” oh no, the tests will just be completed as part of the years work with no extra work or preparation” – in hindsight how right that colleague was!

It HAS become a mania!

It is of no use for Amanda to say that “exams should exist in the service of the curriculum” when quite honestly they don’t in this instance. Yes in an open and progressive educational system which has childrens learning at its core, then an examination and testing system could quite happily sit alongside the curriculum and reflect progress and learning and achievement.

Unfortunately however much we may recognise these as vital components, we are not currently able to achieve this status quo due to external pressures and influences dictated by the very bodies that are expressing these concerns! Concerns it has to be said that were raised as issues right from the outset.

So what are these external Influences?

There are 3 ….perhaps you could identify more but I think these are the main headings:- 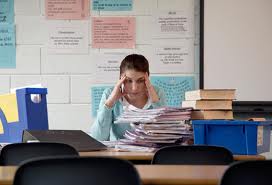 Lets be quite blunt here and say the curriculum is poorly structured, irrelevant, unnecessary and inappropriate in many areas. Sorry Amanda if that stings but that’s just the way it is….very poorly thought out.

So the reports observations about “A striking conclusion that we have drawn from the findings is that, despite the fact that the curriculum is what is taught, there is little debate or reflection about it.” have a somewhat hollow ring about them when staff faced with such an overload are hard pushed just to deliver it (inappropriate content included) never mind have time to debate and reflect…..wouldn’t that be a luxury!

Amanda also comments about a weak theoretical understanding of the curriculum and that planning and structuring of the curriculum is a skill that has been lost. To some degree she is correct. I do remember in one of my schools actually having to hold training sessions for new teachers to show how curriculum planning  should be approached…hopefully colleges and universities have now rectified this in their training! Her comments that the establishment of the National curriculum could possible have contributed to this problem is a misguided statement as is her thoughts that the introduction of a new slimmed down curriculum will now allow and encourage a “new dawn” of planning expertise. It’s not the size of the document Ms Spielman its what’s in it that causes difficulties!

Narrowing of the Curriculum

We have seen 3 important consequences of a reduced understanding of curriculum.

No, no, no totally incorrect. This is not a reflection on any reduced understanding – this is a direct reflection on the “Perfect Storm” that I mentioned earlier. The report goes on to also erroneously state “it seems unlikely that any school has prioritised testing over the curriculum as a deliberate choice. It is likely that, in some quarters, testing has come inadvertently (sic) to mean the curriculum in its entirety.”

Let me give you an example that I came across a couple of weeks ago and to be honest it surprised me as I have never heard this sort of thing said before in all my years of teaching!

The question raised by a colleague was in connection with the assessment of foundation subjects. The colleague was enquiring as to how other schools assessed these subjects.

One reply came back as this…..” In our school we don’t assess the foundation subjects – what’s the point?”

Let me write that again and just consider it slowly as to what it means and shows.

” In our school we don’t assess the foundation subjects – what’s the point?”

Ok let’s step back from the whole statement – I would guess that, like me, you can see that this school is not assessing foundation subjects…their decision but in my opinion a mistake. That part of the statement I can shrug my shoulders at. But the part that shook me was the last bit

I could (and may) write a whole article on what this answer shows and means – but put this reply in the context of the HMCI report and we begin to see how these factors are beginning to affect the thinking in schools.

By looking at my word count I can see I should be ending at this point. So I have put a part 1 next to the title and will continue in tomorrows article for part 2. Tomorrow we will look at the reports focus on the narrowing of the curriculum and just evaluate how informed they really are about what is happening in our schools.